Tattoos are an part of all cultures across the world. They were a tool of communication that carried forward their rich heritage and preserved knowledge for posterity. Now a days, the growing interest of people in the ancient cultural practices and art forms has affected the tattoo art to a great extent. Tribal and historical tattoos have again become a part of the popular culture and people can be seen sporting them. The Hispanic tattoos, representing an important cultural tradition, are gaining wide acceptance in America. Its darker side associated with criminals and gangs is on the wane and the artistic forms have taken over.

The Hispanic tattoos have a huge array of religious symbols and as stated above were an important part of the gang cultures. The designs and motifs revolve around occult symbols, birds, animals, geographical features, tribal men, women, emperors, etc. Since, the term Hispanic refers to Spain and the countries colonized by Spain, the Hispanic tattoos represent a large expanse of cultural heritage from diverse geographical regions. Hence, there is a lot to explore and research.

Here are 20 Hispanic tattoos with varied symbols and images that you will take you on a ride of the Hispanic region in a different way.

Come and soak yourself in the historical facts.

The Inca Emperor in his full-fledged warrior avatar, carved on inside of the arm, looks awesome. Get daring and aggressive with this wolf face Hispanic tattoo that looks formidable. This mythological character stands for hope and life as she is associated with summer and spring. The bull-dog with rose on its head, carved in black and white over the thigh, appears as if it will spring out on you. The image of mother Mary carved inside a flame with a scroll bearing a lettering symbolises love for one’s family. Skull tattoo with flowers and leaves shaped up as eyes and mouth creates a peppy look. The highly embellished and heavy armor placed on the arm is symbolic of the tough wars fought in the ancient times. This large sugar skull tattoo with its colorful and bright shades, carved on the arm, looks extremely catchy. This one is also a mythological character, carved as tattoo, on the bulging arm. A black and white tattoo with roses carved resting on the forearm has two contrast symbols placed side by side. The Hispanic tattoos have religious and mystic symbols associated with them and this tattoo is an example of it. This funny skull with toothy smile and a sash resembles a drug dealer. The Hispanic tattoos were a popular part of the gang culture as is clear on this forearm tattoo. This sleeve tattoo showing a girl wearing a hat and her eyes marked red points to her criminal associations. 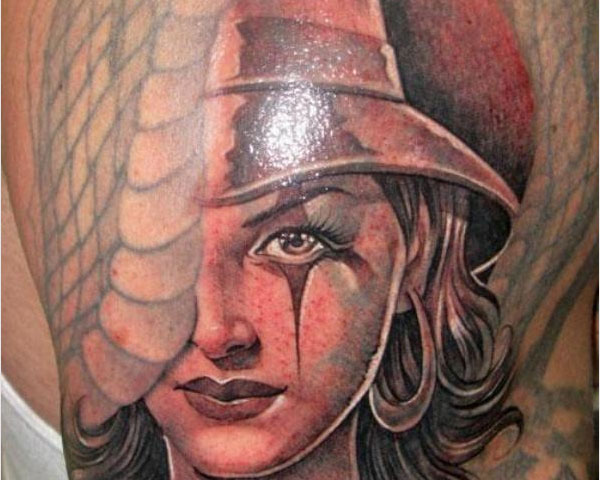 An old man carved on chest has a solemn look on his face signifying sadness and loneliness. Women in the Hispanic culture were daring and attractive whip is clear from this tattoo piece. A colorful tribal man throwing paint from a pot symbolizes a drawing artiste.