Birdman aka Baby is a very famous American rapper and an entertainer. His actual name is Bryan Williams. He is a records producer, a solo performer and also a business man. He is a famous hip hop entertainer and is also known for his unique style with the tattoos found all over his body. He is a cofounder of Cash Money records and is a Billionaire. He recorded several tracks of solo albums as well as for Big Tymers and released them.

This famous rapper also recorded and released several successful volumes along with his son Wayne. In his career Birdman released records like ‘I got that work‘, ‘Hood Rich‘, ‘like father, like son‘, ‘5star Stunna‘ etc with Big Tymers. He recorded his first solo album ‘Priceless‘ and released it in 2009. He is working on ‘Priceless 2‘, ‘My Jewel‘ and many more such mesmerizing works to be released soon.

If you like this article, you might be interested in some of our other articles on Trey Songz Tattoos, Kid Ink Tattoos, Derrick Rose Tattoos and David Beckham Tattoos.

The given picture displays one of the very famous Birdman‘s tattoos on his arm with the date. The picture projects Baby pointing at it. Baby‘s one of the 5 Star Tattoo

This image clearly displays one of the red stars of Birdman‘s Tattoos. This famous rapper holds 5 different star tattoos on his head. Baby‘s one of the 5 Star Tattoo

Cross Tattoo on the Forehead

The image clearly displays a tattoo cross on Bryans fore head. Several other Birdman tattoos on neck and hand area also clearly visible in the shot. Cross Tattoo on the Forehead

This is an image of Bryan Williams, famous as Birdman or Baby. This image displays few Birdman tattoos on the hand of this famous American rapper. The left half of Baby‘s face tattoos are clearly seen in the image. Birdman tattoos extending from the face to neck are seen. Baby with his Brother

Birdman is captured together with his younger brother Slim. Bradman tattoos on his hands are clearly seen in the image. Baby with his Brother

The image displayed projects Birdman and Wayne on the shore. Birdman tattoos on his hand are visible to an extent but the other rapper‘s tattoos are clearly seen. This picture projects a more relaxed Bryan in white. Few birdman tattoos like the cross on his forehead is clearly visible. Tattoo Behind the Palm 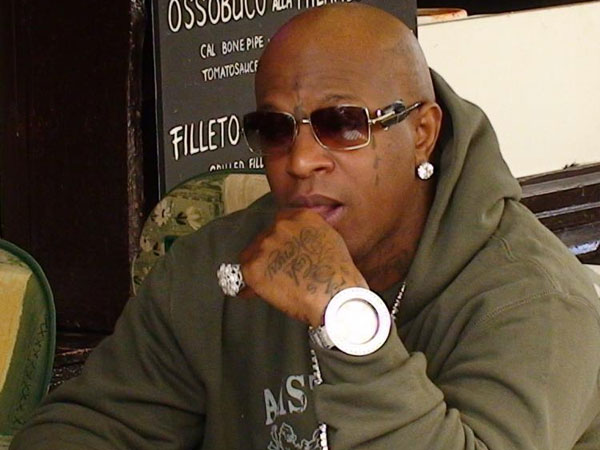 Tattoo Behind the Palm

This image displays singer Mya and rapper Baby at Miami on her birthday. Birdman tattoos on his fingers are partly visible. The image displays Birdman tattoos on his head. The rappers 5 star tattoos are pretty famous. Neck amidst of Tattoos

This image of Bryan projects Birdman tattoos found on his neck. The big star on the rappers neck seems unique. Neck amidst of Tattoos

This picture of Birdman displays Birdman tattoos found on his fingers. This image where Baby is shot in his hoodies displays Birdman tattoos on his hand. First half of the snap displays Kelly the R&B legend. The later half projects one of the very famous Birdman tattoos, the red star. This snap projects a cheerful Bryan. The image projects Birdman tattoos on his arm clearly. Tattoos on Birdman‘s Side Face

This image displays few Birdman tattoos that can be seen on the right half of his face. Tattoos on Birdman‘s Side Face

This image of Bryan displays the central red star on his head. Birdman tattoos are known for their uniqueness and this is a perfect one to show it. This image of Jay and Baby projects a clear hand of Jay and few Birdman tattoos on his hand. This snap is captured during Birdman‘s Birthday. It shows only few Birdman tattoos on his face but Wayne‘s hand tattoos are clearly visible. This image of birdman and his son Wayne is an extra ordinary one where the both the rappers Wayne and Birdman‘s Tattoos are clearly projected. Coloured Birdman tattoos on Baby‘s arm are partly visible in the click with their smiles dominating major part of it. The picture projects Birdman a Billionaire holding some cash. Birdman Tattoos on his neck are partly seen. The picture projects Birdman amidst of his celebrations. It clearly displays several Birdman tattoos.