Bad artwork can really ruin an otherwise great tattoo design, but no amount of artistic talent can redeem bad tattoo designs! People who get inked with bad tattoo designs are sentenced to life with their own bad decision. Tattoos aren’t easily removed or changed, so you better make sure that you not only choose a good tattoo artist, but also a timeless tattoo design that you won’t regret in the future!

But…what is she says no?? I wonder if Caroline got her answer tattooed on her back. 2. What Color is the Dress Tattoo

Was the blue and black or white and gold debate really that memorable? It’s almost like this guy just wanted another tattoo and was desperate for a new tattoo. Any design! Some of the worst bad tattoo designs are Chinese characters, not because they’re not aesthetically pleasing, but because they may not mean what you think they mean. For example, I highly doubt that this woman loves chicken noodle soup enough to get it tattooed on her back, but she’s stuck with it now. For the love of god, don’t get a Chinese character tattoo unless you’re absolutely sure what the symbols mean! Do you really want to announce to the world that you were the Fantasy Football loser in 2010? Well, that’s what he gets for agreeing to this stunt at the beginning of the season! Remember kids, tattoos that you have to get because you lost a bet will usually be some pretty bad tattoo designs! Oh my… There’s a lot happening with these matching bad tattoo designs! I’m not really sure where to start. The dead unicorn ripped in half or the puddle of rainbow blood? Most people think that only God can judge them. Not this guy, though! Only Judge Judy can judge him. This is a pretty weird tattoo designs, but the artwork isn’t bad! What would Jesus do you ask? Probably gag a little when he sees your Human Centipede tattoo! If you weren’t afraid of clowns before, you might be now! This clown tattoo is just plain creepy! And, why is that little kids crying? Could it be the creey clown’s severed hand maybe? I loved troll dolls as much as the next kids when I has younger, but that doesn’t need I need one inked permanently on my body. Then again, I don’t have a perfectly shaped hairy patch to complete the tattoo. Of course, if this guy shaves or loses that hair, it’ll just look like a troll doll missing the top of its head. 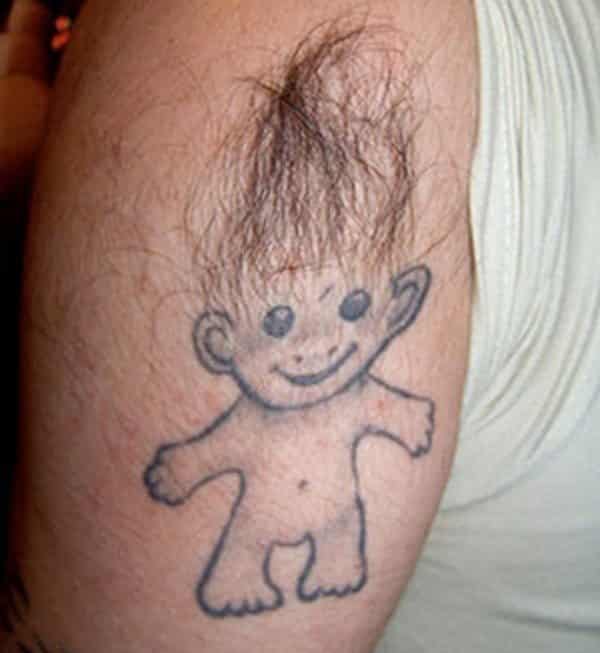 11. Sleazy Legs Behind Your Head Tattoo

Oh, well that’s romantic! I wonder what this guy will think of this bad tattoo design when he stops being a sleazy pig and turns into a human being? That’s the problem with sleazy tattoos—they may seem amusing at the time, but they’re usually bad tattoo designs that you regret later! What do you think he’s trying to say here? I wonder if he’s honoring someone named Brenda? Flattering. Hopefully the relationship works out, otherwise he might be looking into changing his own name to Brenda to explain this embarrassment. Receipt tattoos are just bad tattoo designs. Period. A McDonald’s receipt tattoo, though, is the lowest of the low. Now that you’ve seen some pretty bad tattoo designs, hopefully you’ll be a little more vigilant with your own tattoo design! Don’t rush out and get a tattoo before considering the tattoo design first. To avoid getting permanently inked with bad tattoo designs, you should sit on your design and wait a few weeks before taking the plunge. Look at the design every day and ask yourself will I regret this later?